Summary: The old version of the Manuscript Browser at chs75.harvard.edu is going away. Its replacement will appear at amphoreus.hpcc.uh.edu. In the interim, a beta application is available at http://beta.hpcc.uh.edu/tomcat/hmtapps/.

An archive of every digital image in the HMT library is always available for manual and automatic downloading.

In 2007, shortly after we completed photography of manuscripts Marciana 822, Marciana 821, and Marciana 841, we wrote and posted online an application for browsing the high-resolution images. This application used the Google Maps API to allow users to manipulate the images; it allowed searching by the enumeration of manuscript folios and by poetic book and line.
Technological and scholarly considerations alike dictate that we take this original application offline. Using the Google Maps API is not ideal for our purposes. Google Maps assumes that it is displaying images of the surface of the earth, for one thing, and using it for serious work on manuscripts requires many workarounds, compromises, and hacks. More serious, though, is the problem of scholarly citation. In the five years since we wrote the original facsimile browser, our understanding of scholarly citation in a digital world has matured. By standardizing on citation with URNs, we can deliver effective applications today, using scholarly material that can remain valid in the future. The old application does not support citation using URNs; its replacements do.

The application at chs75.harvard.edu will cease working at any moment. New “Facsimile Browser” applications are being developed on two hosts: beta.hpcc.uh.edu and amphoreus.hpcc.uh.edu. beta hosts experimental versions of HMT applications; when we consider versions of an application ready for regular public use, we will also host them on amphoreus.
In the meantime, users can use two resources for accessing digital images of the Homeric manuscripts:


About the Beta Facsimile Browser

The application that lives at http://beta.hpcc.uh.edu/tomcat/hmtapps/ allows users to look up digital images of manuscripts, and associated data, by requesting citations of folios or by poetic book and line.
We wrote this application to explore a URN-driven graph of HMT data. Its state as of December 26, 2012 reflects its origin as a test-bed for this way of integrating our data.
The application will evolve over the next few weeks as we redesign the user interface with a wider audience in mind. Once that redesign is complete, we will put the application on the amphoreus.hpcc.uh.edu server and announce its public availability.

The Homer Multitext consists of data–images, texts, collections of regularly structured data. It is a reality of the twenty-first century that technology changes rapidly, and thus how we interact with data will change rapidly. From the outset, the editors of the HMT assumed that any particular end-user application would have a lifespan of only a few years. Our goal has been to ensure that the data remain accessible regardless of technological changes, and that the discoveries and insights generated through widespread and free access to that data is never trapped in forms dependent on any particular technology.
Posted by Christopher W. Blackwell at 2:31 PM No comments:

Casey Dué wrote last week about the accomplishments of some undergraduates at Brown University who, given the opportunity and the “extreme academic freedom” to pursue original research using primary sources (namely, a book of Roger Williams’ containing some hitherto undeciphered handwritten notes), were able to solve a long-standing mystery. Their access to these primary sources and the freedom to work on a scholarly problem with them demonstrates the transformative nature of real undergraduate research, both for the study of these primary sources and for the students’ education.

Most of the primary sources in our discipline are not available at libraries in this country, and that is why the digital photographs of them are so important to the Homer Multitext project. The digital technologies of creating these images and making them available to all interested researchers is similarly transformative of how research in our discipline can be (and even should be) conducted. What’s more, digital technologies can change how research is shared, and therefore how undergraduate researchers can join the scholarly conversation on a topic. William Pannapacker wrote in the Chronicle of Higher Education last month about how these digital technologies eliminate the “Indiana Jones Warehouse” effect that was the traditional outcome for undergraduate research. As Pannapacker put it, “There’s no guarantee that the world will beat a path to your online project, but at least it’s available, and updatable. It’s not a moribund, bound manuscript shelved in a university library’s off-site storage warehouse.” Perhaps the least expected and most gratifying part of the Homer Multitext project so far has been how it has changed how we work with students and get them involved in original research of their own within the project. Some of their initial work is already available here on the blog (search for the tag “undergraduate research” to see them all) and on the project website, but the next stages of the project will do even more to bring their work to the scholarly community.

Posted by Mary Ebbott at 9:12 AM No comments: 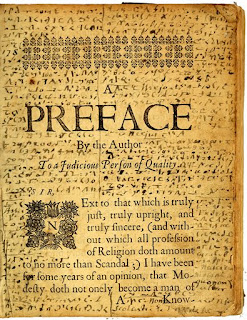 An interdisciplinary team of librarians, professors, and Brown University undergraduate students working at the John Carter Brown Library have decoded some of the last known writing of Roger Williams, the religious dissident, abolitionist, and founder of the colony of Rhode Island and the First Baptist Church. The library had possessed a volume entitled "An Essay Towards the Reconciling of Differences Among Christians" containing Williams' hand written notes in the margins since the 1800's, but since the notes are written in an obscure shorthand, the writings had never been deciphered. An undergraduate math major, Lucas Mason-Brown, combined frequency analysis together with an understanding of the court stenography once used in England (in which Williams was trained) to work out Williams' system. The writings have proven to be of great historical significance, including twenty pages on the subject of infant baptism. You can read more about the decoding and what the team discovered in the Providence Journal and in the much fuller account on Slate.

We call attention to this remarkable project here as another example of the kind of interdisciplinary and intergenerational work that we have advocated in connection with the Homer Multitext. Next summer the Center for Hellenic Studies will host our third seminar devoted to training undergraduate and faculty teams of researchers, who will then help us to publish in its entirety for the first time the contents of the tenth-century manuscript of the Iliad known as the Venetus A. This years's seminar will include teams from six US institutions and one in the Netherlands.

I am proud to be an alumna of Brown, which is a University that has always exemplified what I would call "extreme academic freedom" coupled with an intense focus on undergraduate education. This project is a wonderful testament to what is possible in that kind of academic environment. Stay tuned for a forthcoming post on the place of undergraduate research in the realm of Digital Humanities, in which we will highlight more examples of this kind of groundbreaking work by undergraduates.