Eric Raymond popularized the phrase "release early, release often" as a philosophy for software development. It works for digital scholarship, too.
We're happy to announce today an early release of a facsimile browser incorporating new material from our photography in the Escorial last summer. (The adjacent image of folio 18 recto is linked to the new browser, or see the facsimile reader home page at http://pinakes.hpcc.uh.edu/codex.)
The digital facsimile edition requires data about the manuscripts (including what folios appear in what sequence), an index aligning each folio with a canonical citation of lines of the Iliad, and an index identifying which side of which folio each image illustrates. A group of dedicated and talented volunteers (some shown in the photo below) has been meeting regularly on Friday afternoons to put this material together for the E3 manuscript, prior to beginning work on a full diplomatic edition of the text (as others are already doing for the Venetus A and Venetus B codices). 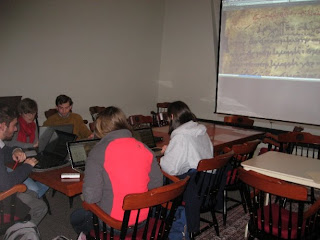 Perhaps even more remarkable than the volunteers' rapid mastery of E3's Byzantine script is the fact that all of the students are in their first year of Greek at Holy Cross. If you're not accustomed to learning about the transmission of Homer from first-year Greek students, a Friday afternoon with this group is enlightening.
You will undoubtedly see postings on this blog in the future announcing further releases of material from "Team E3." In addition to the puzzles they've had to solve to make today's release available, they are compiling careful observations that will lead to a helpful guide to the paleography of E3, and have already noted a number of unpublished or unappreciated discrepancies bewteen E3 and other manuscripts that are forcing all of us working on the Homer Multitext project to reassess the traditional scholarly views on the (b) family of manuscripts of the Iliad.
The E3 group has currently indexed more than half of the manuscript: we're including folios 1 recto - 109 recto (covering Iliad books 1-8) in today's release.

Our profound thanks to all members of the group (alphabetically):
Posted by Neel Smith at 1:54 PM No comments:


In this post I will give some basic information about the Iliad manuscript known as E4 (Allen, = West F, Escorialensis Ω.I.12), and then proceed to describe a single folio in detail, folio 188 recto. (Thanks to University of Houston undergraduates Kat Dybala and Matthew Davis for their contributions to my understanding of this folio!)  In this way it will be possible to see how E4 relates to other manuscripts in the Homer Multitext as well as the several features that distinguish it from them.

E4 is an eleventh-century parchment codex, thought by Allen and previous scholars to be later than E3 (also eleventh century).  It consists of 216 folios, containing a complete text of the Iliad, a commentary with lemmata on Iliad 1–2.300, lives of Homer, a summary of the Cypria, an excerpt from the Batrachomyomachia (“Battle of Frogs and Mice”), excerpts from Porphyry, and other scholia with lemmata. The main text of the Iliad begins on folio 7, where a new set of scholia likewise begins. Individual books are preceded by hypotheses and a one verse metrical summary (the same one verse summaries that you find in Venetus A). The layout of E4 is quite different from Venetus A, Venetus B, and E3. On each folio there are two columns. The left column contains the text of the poem and the right columns consist of a paraphrase. According to Allen (1931:148), E4 is not related to any of the other early minuscule manuscripts. The manuscript seems to have been acquired in Venice for the price of 25 ducats, according to a subscription on the last folio (liber mei Benedicti Cornelii quem emi meis pecuniis pretio ducatorum viginti q).

Folio 188r of the manuscript known as E4 (= West F, Escorialensis Ω.I.12) marks the beginning of Iliad book 22. We may compare it to Venetus A folio 282r, Venetus B folio 292r, and E3 283r. Its facing page on the left side, folio 187v, is taken up by a hypothesis, a large selection from Porphyry, and scholia, including comments on the text of the Iliad that is written on 188r.

The folio contains Iliad 22.1-37 in the left column, and a paraphrase in the right. There are scholia in the top and outer margins and between the lines of the paraphrase. This layout differs considerably from that of the Venetus A, the Venetus B, and E3, where there is a central block of Iliad text with scholia surrounding it in the top, bottom and outer margins, as well as, to a much less extent, in the inner margin.

A large omega in red comprises the first letter of the main text of the poem in the left column. The initial omicron of the paraphrase  text in right column is also in red, and somewhat larger than the rest of the paraphrase text, set in the margin to the left of the text block.  Occasionally the initial letters of the line in both the left and the right columns are highlighted in a similar way.

There is a metrical summary of the book in red ink that spans the width of the two text blocks. It is placed just under a decorative border across the top, also in red ink. The summary reads: ἱλιάδος χ ὁμήρου ῥαψωδίας : χι δ‘αρα τρὶς περὶ τεῖχος ἄγων κτάν‘ Ἕκτορ‘ Ἀχιλλεύς (Rhapsody 22 of the Iliad of Homer: Chi. And leading him around the walls three times, Achilleus kills Hektor). This is the same summary as in Venetus A. There is no other subscription on the page. Note that the Venetus B has a different summary: χῖ Θέτιδος γόνος ὡκὺς ἀπώλεσεν Ἕκτορα δῖον :- ἀρχὴ τῆς χῖ ὁμήρου ῥαψωδίας  :- (Chi. The swift offspring of Thetis kills brilliant Hektor.  [This marks] the beginning of rhapsody 22 of Homer). E3 has the same summary as B; for this book in E3 there does not seem to be anywhere the summary of A in any hand.

We can already see that E4 has many features that distinguish it from the other manuscripts with scholia, including those of comparable date. Its layout is different, it contains a running paraphrase of the poem, and its metrical summary at the start of each book matches the tradition that we find in A, not B. The hypotheses at the start of each book of E4 are not found in A, B, or E3.

12    E4 reads δεῦρ’ ἐλιάσθης (with A, T, and several other mss.) whereas several papyri and B read δεῦρο λιάσθης.

27    E4 reads ὀπώρηις along with A (the text of A appears to have been corrected here) where most mss. read ὀπώρης.

33    E4 reads γ’ ἐκόψατο where most other manuscripts and the papyri read γε κόψατο.

36    E4 and A read ἑστήκει where most manuscripts read εἱστήκει.

Although one folio cannot be considered a representative sample, E4’s text of the Iliad on this folio seems to resemble A more closely than B.

The scholia of E4 seem to have been collected from several different sources. There is a set of numbered scholia which corresponds to the numbered scholia in B, E3, and Laurentianus 32.3 (= Allen C and West C). There is another set of scholia in the same hand that is connected to the text with symbols, and these contain material from the so-called “D scholia” (also known as the scholia minora). This set of scholia is also found in B, but it is in the second, later hand of B. The scholia in this group are linked to the text through signs.

On folio 188r, we do find both numbered scholia and scholia linked to the text through symbols. Some scholia are written between lines of the paraphrase. The scholia that we find on E4 can all for the most part be found in B (not A), but they do not have the same layout as in B and their associated numbers and symbols do not correspond with those in B. In a future post I plan to provide a transcription of the scholia on folio 188r together with a comparison with the corresponding set on B and E3. There are definitely differences. For example, we find this comment at the top of folio 188r of E4:

Most of this comment, but not the whole, is in the numbered scholia of B and in E3 (with no lemma however in B or E3), while the whole, with the exception of ἐθεραπεύοντο, is also in T. So for this scholion, E4 resembles T more closely than B.

A preliminary study of a single folio reveals that E4 is a very unusual manuscript, both in its layout and content. Its main text seems very possibly in some way related to the tradition of A, while its scholia are related to those of B (and E3 and C). The scholia are related to those of B, but there are many differences between the two sets, most notably that the group of scholia connected by symbols are in a later hand of B (and not present in E3) while in E4 they are in the same hand and of the same date as the numbered scholia. As Allen observed, this manuscript cannot be precisely connected with any single other manuscript or manuscript family, and it would well deserve further study.
Posted by Casey Dué at 10:41 AM No comments:

It was a busy fall semester, although the lack updates here may make it seem as though nothing was going on with the project. On the contrary, progress continues with both the manuscripts and the papyri. At Furman University, undergraduate researchers continue making XML editions of the papyri. One of the 2010 summer interns at the College of the Holy Cross continues his work mapping, inventorying, and transcribing the text and scholia from the Venetus A. Other students are working on editing the Iliad text of A so that we have an electronic version of exactly what text that manuscript has (no more rooting around in apparatuses of modern editions!).

We acquired high-resolution and (in the case of E3) multispectral photographs of two more manuscripts of the Iliad in July 2010 (for more detail, see these two posts from last summer), and students at Holy Cross are indexing the photographs of the manuscript we affectionately call E3 (after Allen) according to what lines of the Iliad appear on each one, while students Furman are doing the same for E4. My colleague, Neel Smith, has been able to get students in their first-year of Greek involved in this project, and allowing students at the introductory level of the language to do research with primary sources has been phenomenal. We are just beginning to get a good idea of what these two manuscripts contain, and we will start posting small, initial findings as we get to know them better.

Posted by Mary Ebbott at 4:26 PM No comments: