Images of the Geneva Iliad have been Posted!

Images of the Geneva Iliad, which has undergone extensive restoration and digitization in a partnership between the E-Codices project of Switzerland and the Homer Multitext, have now been published. Here is an excerpt from the E-Codices press release: 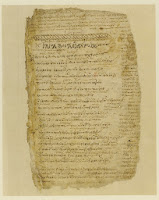 The “Geneva Iliad” was most likely produced in Constantinople in the 13th century. The manuscript was purchased in the 16th century, probably in Venice, by Henri Estienne, who used this manuscript as a basis for his 1566 edition of the Iliad, which remained the standard edition into the 18th century. This manuscript is unique for numerous scholia, which are not found in any other similar manuscript.
The digital publication of this manuscript was requested in 2010 by the “Homer Multitext”, a project of the Center for Hellenic Studies at Harvard University, which uses digital techniques to facilitate research regarding the multiformity of the textual tradition in Homeric epics.

We are extremely excited to be able to start making use of these images within the Homer Mutlitext. The E-Codices Creative Commons non-commercial licensing on the images will allow to use these images for education and research. As with the other manuscripts we have brought together digitally within the project, we will now be able to compare the Geneva Iliad side by side along with other manuscripts, and will no doubt learn a great deal about how the manuscript was conceived and constructed, the information contained in the scholia, and the sources for its scholia.

This collaboration between the Mellon Foundation, the E-Codices Virtual Manuscript Library of Switzerland﻿, and the Homer Multiext has been four years in the making. We are so grateful to the Bibliothèque de Genève for overseeing the restoration, digitization, and scholarship on the manuscript that allowed for publication of these images to happen. Stay tuned as we learn more about this remarkable manuscript with its unusual lay out and unique set of scholia.
Posted by Casey Dué at 8:59 AM 4 comments: