We are delighted to announce that five students have won research fellowships to work on the Homer Multitext this summer. Christopher Rivera and Megan Truax have won Summer Undergraduate Research Fellowships from the University of Houston. At the College of the Holy Cross, Nikolas Churik, Brian Clark, and Deborah Sokolowski will participate in the Mellon Summer Research Program in the Social Science, Humanities, and Arts. The students at both institutions will spend the summer working as a team to transcribe, edit, and mark up folios from the tenth-century manuscript of the Homeric Iliad known as the Venetus A, which is the oldest extant manuscript containing a complete text of the poem. Much of their work will focus on books nine and ten of the Iliad, which feature a night time embassy to Achilles and a night raid by the Greek soldiers Odysseus and Diomedes on the Trojan camp. 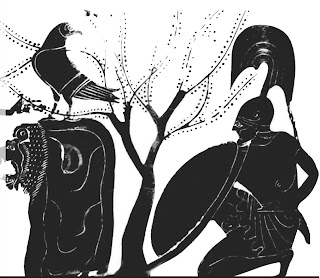 In addition to the work of these students, the Homer Multitext will benefit this summer from the research of eight different faculty/undergraduate student teams. The teams come from Brandeis University, Furman University, Gustavus Adolphus College, College of the Holy Cross, University of Houston, Leiden University, Trinity University in San Antonio, and University of Washington. The teams will participate in the Homer Multitext summer seminar at the Center for Hellenic Studies in June, and will continue their work over the summer and into the next academic year. As we did last year, we will report on the discoveries of the students as they are happening over the summer, and publish posts from the students themselves about their work.