Investigating the Red Marginal Notes of the Venetus A

A guest post by Stephanie Lindeborg, Class of 2013, College of the Holy Cross

12r–13r, the first two folios that contain the Iliadic text in the Venetus A, are densely covered folios. Besides the texts, scholia, and drawings found on these folios, we can see small marginal notes written in bright red ink. They appear only through 13r, never to be seen again in the entire manuscript from what we can detect in the natural light photography. While it may be possible that they have completely faded, given that many of those that we can make out are barely visible, it seems highly unlikely that almost an entire manuscript’s worth of red notes have completely faded away. It seems even more unlikely considering the fact that even though 12r is one of more damaged and faded folios, we can still make out red marks on that folio, some of them quite clearly. This evidence suggests that the scribe who wrote the red marks ceased to include them after 13r or roughly thereabouts.

There are two different kinds of red marks that appear between 12r and 13r. The first one that appears in the manuscript is shown in the image:

We can make out the letters “ερώ άπ” which is an abbreviation for “ἐρώτησις ἀπόκρισις” (“question and answer”). We derive this expansion from Dindorf’s edition of the Venetus A scholia, who, in a footnote to the first scholion with this mark, writes that the abbreviation appears in red and should be expanded to “ἐρώτησις ἀπόκρισις” (seeing as the scholia deal with questions, we see no reason to doubt this expansion). There are two occurrences of this red abbreviation (both on 12r), both with scholia that pose and answer a question. The scholia follow the general formula of “διὰ τι… ὅτι/ἵνα…”. It is clear that the two scholia marked “ἐρώτησις ἀπόκρισις” are not the only question/answer scholia in the manuscript. Were there simply too many to mark? Given the formulaic nature of these scholia, it might be reasonable to suppose that the reader no longer needs the help of the scribe to know that the scholion is a question/answer scholion after being told twice what such a scholion looks like. More interesting than why the scribe stopped marking question/answer scholia, is why he started in the first place. It is highly likely that the scribe was working from a text of Homeric questions. The first and most probable suspect would the Ὁμήρικα ζητήματα (Homeric Questions) of Porphyry. There is still quite a bit of guesswork to determine whether these question/answer scholia are Porphyry’s. In Dindorf’s aforementioned footnote, he writes that most scholia of this formulaic nature are generally attributed to Porphyry, but this one (i.e. the first scholion marked question/answer) is a slightly shorter version of one that appears in the Venetus B and is attributed rather to Zenodotus. Dindorf also refers in this footnote to a passage from his preface which states that there are several shorter question/answer scholia which are generally different from Porphyry. He also notes Aristotle authored a Homeric Questions as well (ἀπορήμασιν Ὁμηρικοῖς), which are said to have influenced Porphyry and are different from the content of the scholia in the Venetus A.

In my investigation I searched through the TLG’s collection of the relevant texts of Porphyry and discovered that the two marked scholia do appear, at least in part, in Schrader’s 1880–1882 edition of the Homeric Questions. Only the first half of the first marked scholion appears in the Quaestionum Homericarum ad Iliadem pertinentium reliquiae (1.1.21–1.1.28). The Venetus B scholion, to which Dindorf refers, appears directly before the A scholion in this edition. It is unclear, however, where the remaining half of this scholion might come from, as it does not appear in any editions of Porphyry’s Homeric Questions including Sodano’s 1970 edition which is based on an incomplete manuscript of the Homeric Questions and does not include material that has only survived through the Homeric scholia. The Schrader edition does attribute the scholion to the Venetus A, which makes it especially interesting that the second half of the scholion is not included. Was the latter half not deemed genuine Porphyry by the complier of the edition? He also attributes the same material to another manuscript, Lipsiensi 32 (olim 1275). It is equally possibly that this other manuscript only includes the material to where Schrader breaks off, but this still means that Schrader was looking at both manuscripts and made an editorial judgment not to include the second part of the scholion.

The whole translates to:

They question why it [the poem] begins with μήνις such a noun of infamy. It is because of these two things. First it is because such a part of the soul flows from suffering and makes the listeners attentive to the greatness/loftiness and accustoms/trains us to bear suffering nobly. He is about to narrate battles. Second: because it makes the victories of the Hellenes plausible. Since he was intending to portray the Hellenes victorious, naturally he does not inveigh against them, more plausibly by not indulging in praise of them [Here is where the Quaestionum Homericarum ad Iliadem pertinentium reliquiae stops]. It begins with μήνις seeing that it [μήνις] becomes the cause for actions. Both elsewhere and in tragedies, it creates a tragic introduction. And because the narrative of misfortunes causes you to be attentive. And the best healer possible [Apollo], first raising up the plagues of the soul, later supplies the cures. To introduce pleasures before the end is Hellenic. One must know, just as there is a winter fig from the fig tree, then there is a wild fig, a fig, and a dried fig. In this way first: ὀργή [impulse], θυμός [heart], χόλος [gall], and κότος [wrath] [are like] μῆνις. Similarly the poet with synonymous nouns said for Achilles “ἢἐ χόλον παύσειεν, ἐρητύσειε τε θυμόν” (Iliad 1.192)· “οὐδ’ ὄθομαι κοτέοντος” (Iliad 1.181), “αὐτὰρ ὁ μήνιε νηυσίν” (Iliad 1.488)

From where the Quaestionum Homericarum ad Iliadem pertinentium reliquiae leaves off, the scholion continues to enumerate the reasons why the poet begins the poem with “μῆνιν ἄειδε,” but it is possible to see a change mid-scholion. The scholion begins saying there are two reason the poem starts with μήνιδος and those two reasons are listed in the portion published in the Quaestionum Homericarum ad Iliadem pertinentium reliquiae. In addition to the ordinal differentiation, the two reasons are contrasted in a μὲν… δέ… construction. The next part of the scholion begins another μὲν… δέ… construction that is clearly distinguished from the first half found in the Quaestionum Homericarum ad Iliadem pertinentium reliquiae. It could be that the scholion is combined, part-Porphyry part-someone else who wrote about the same issue. Certainly the later parts of the scholion go off in a direction very different from the beginning.

The second marked scholion appears in its entirety in the same edition of the Homeric Questions (1.18.6–1.18.9). It too is attributed to the Venetus A. Yet other scholia that have gone unmarked in Book One appear in this edition of the Homeric Questions at least in part if not in entirety. There are, however, scholia that begin in this formulaic way but do not appear in any edition of the scholia. Porphyry’s name never appears in the manuscript with any of these scholia. It is certainly a point for further research to determine whether these scholia really can be attributed to Porphyry and whether there is material that has not been attributed to Porphyry but perhaps should. It is, I think, safe to say that these marked scholia are likely originating from a text of Porphyry that the Venetus A scribe was using to compile the scholia.

The second type of red mark that appears in the manuscript looks like this: 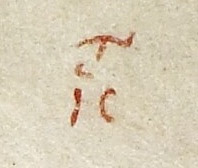 Many of these are faded, but in a clear image we can make out the letters “ἱστ” short for “ἱστορία” (i.e. a narrative or history). Dindorf expands this abbreviation in his edition, and then notes in footnotes that the abbreviated letters appear in red. The scholia noted by this mark are generally longer scholia that detail larger, tangental background stories. Of the twelve stories marked are: the origins of the Hellenes and the Achaeans; the origins of the word “ἥρως”; the decree of Zeus; Agamemnon’s family tree; the birth of Apollo; Daphne and Apollo; why there is a temple to Apollo at Cilla; where Tenedos got its name; two different reasons why Apollo might be called the Sminthean (in two separate scholia); the origins of the Danaans; and the development of burial rites. All of these scholia share the common thread of explaining references found in the main text. These are not the last of such scholia to appear in the manuscript.

Again we find ourselves wondering why the marks stop after 13r. These scholia marked ἱστ’ are not formulaic like the question/answer scholia. We therefore cannot suppose that a reader would continue to recognize narrative scholia on that basis. There are certainly more scholia of this variety than are marked, so why doesn’t the scribe continue marking them (or why did he begin to at all)? Furthermore, like the question/answer scholia, are the narrative scholia evidence that the scribe is compiling the Venetus A scholia using multiple manuscripts and sources that we no longer have? Since they appear so similar to the the question/answer markings, is it reasonable to suppose that these also come from a source the scribe was working with? If that is the case then we must wonder what that source is. What we can say with a reasonable degree of certainty is that either the Venetus A scribe, or a scribe who copied the manuscript(s) our scribe was working from, compiled the Iliadic scholia from a variety of sources.

Email ThisBlogThis!Share to TwitterShare to FacebookShare to Pinterest
Labels: undergraduate research, Venetus A