The dog of Orion 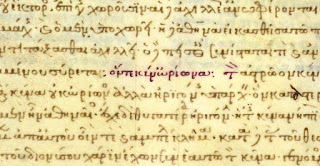 In a previous post, I attempted to describe folio 188r of the eleventh-century manuscript of the Iliad known as E4, in order to make some preliminary observations about the manuscript and its relationship to other Medieval manuscripts of the Iliad with scholia. It was a difficult task, even with the help of my colleagues Christopher Blackwell, Mary Ebbott, and Neel Smith. E4 has not been well studied, and it has many features that make it unlike the other manuscripts we have digitized as part of the Homer Multitext. It became clear to me as I was working on it that I could not fully appreciate 188r without understanding its facing page on the left side, folio 187v. I have now had the chance to study 187v in detail, and it has only confirmed my initial impression of the manuscript, that it is an unusual, very likely unique assemblage of text and paratexts that span multiple lines of transmission. The scholia contained on folio 187v, which comment on the text of 188r (containing Iliad 22.1–37), are particularly indicative of the unique character of E4.

Folio 187v is taken up by a hypothesis to book 22, a large selection from Porphyry, and scholia, both with and without lemmata, including comments on the text of the Iliad that is written on 188r. It should be noted from the beginning that there are two separate hands in this manuscript, which both Allen and Erbse deem to be contemporaneous. The first hand has written the hypothesis, the scholia immediately following it, and the text of the poem and paraphrase on the next folio. The second hand has written the selection from Porphyry and the scholia in the margins.

At the top of folio 187v is the excerpt from Porphyry’s Homeric Questions. The following is a transcription, based on visual inspection of the manuscript images and Schrader’s (1880-1882) edition: